We Really Hate It When Cyclists Jump Red Lights

Yeah, we hate it cos that's OUR job!

As important drivers of nice big Aberdeen Cars, we bet that like us you're sick and tired of being lectured by meanie-greenie treehuggers about carbon emissions.

That's why we were delighted when local aspirational freesheet - the West End Gazette - plopped through the front door this weekend, containing as it did a section on "Top tips on turning your motoring life eco". 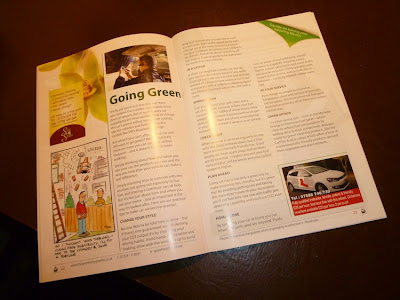 The publisher and editor of this free consumer/lifestyle mag, fat larger lady Sue Simpson echoes our above sentiment and says:


"There are some eco-warriors out there who believe that the humble automobile is the devil on wheels. But in recent years, car manufacturers have worked hard to change the car's planet-killing image..."

Her "Going Green" article then details some super tips on eco-driving like:


"[these] are ways you can cut your carbon footprint - and it doesn't have to mean walking!"

Well thank Ford for that! We certainly wouldn't want to walk anywhere. Ever. Not ever ever ever ever ever. That would be the very opposite of progress. We're still waiting for drive-in banking to arrive in Aberdeen "City and Shire", but no - no, we're stuck with online banking.

The one criticism we have about obese cuddly Sue's Top Tips is that they manage to conflate material recycling and chemical toxicity with carbon emissions. Now, it's clear that she's done this with the best of intentions, to dilute any possible danger of scaremongering about the onrushing climate catastrophe. But, hasn't she heared? Global Warming will be GOOD for Scotland!
Posted by 'Old Skidmark' at 08:50 2 comments:

Are You a "WINTER WALKER"?

A couple of weeks ago, we wrote about our approval of the dangerism propagated by the CTC (Cycle Touring Club)...


Dangerism is a term which refers to the practice of maximising the perception of risk and the cultivation of fear and the accommodation of those fears by a "hardening" of safety measures, which then, in turn feed back into a greater yet perception of risk in an increasingly strident feedback howl, until an activity comes to be regarded (however irrationally) as being almost unthinkably dangerous.

...was what we said. Dangerism is marvellous, for it allows a pro-motoring message to be couched in terms of road safety. Similar approaches to 'safety' in transport choices can be seen all around. From the marvelous "Walkodile" for children to the propagation of cycle helmet and hi-vis clothing campaigns for cyclists, dangerism is always with us these days. On behalf of the drivers of Aberdeen Cars, we approve of all this dangerism, because it actually succeeds in getting across the message that walking and cycling are not safe, all the while absolving the blameless hard-pressed motorist of all blame. These are not "safety" campaigns, they are "danger" campaigns which serve the aim of frightening pestestrians and cyclists back into their cars, where they should be anyway! What we particularly like about all this road "safety" stuff is that it never ever ever suggests that the important drivers of Aberdeen Cars examine their own behaviour. Instead, these dangerist initiatives always focus on the potential victims of traffic "accidents", and put all emphasis on how the victims probably had it coming. After all, what did they think they were doing - deciding to walk or cycle in the first place? Everyone knows that it's common sense that walking and cycling are dangerous.

So now we congratulate our partners at Grampian Police, NHS Scotland, First Bus and Aberdeen City Council on their latest piece of dangerism: Operation Winter Walker, which is aimed at senior citizen pestestrians. 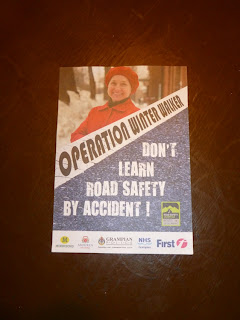 The Operation Winter Walker materials are full of dangerism best practice, emphasising the hazard and fear which the Police, the NHS, First Bus, and the council want old people to associate with walking.

"Don't Learn Road Safety By Accident!" shriek the Operation Winter Walker posters and handouts, subtly re-introducing the word "accident" into the transport lexicon. For some time now, the word "accident" has not been used by the authorities, and the word "collision" has been used instead: "RTC - Road Traffic Collision". We applaud this police-sponsored use of the word "accident", with its connotations of blamelessness for the drivers of Aberdeen Cars - it's a return to common sense attitudes at last, and a sign that the War on the Motorist is finally over.

However, we would be lax in our communitarian Big Society responsibility if we were not to point out that there is, perhaps, a pressing issue behind the necessity for Operation Winter Walker - and that's the fact that poverty is forcing senior citizens out of their cars and on to the pavements. Shame. It must be that, for what other reason could there possibly be for the older generation to choose to walk about the place, particularly in winter? It shames us as a society that our old age pensioners cannot afford to get about in a nice wee car.

Pollution Victory for the Drivers of Aberdeen Cars

As important drivers of nice cars, we bet you're sick and tired of being lectured by meanie-greenie treehuggers about pollution.

Well, we're delighted to report that this problem has now been solved with the creation of an air quality monitoring system for Scotland, as reported on the BBC's flagship local news programme "Reporting Scotland". Watch the video if you can be bothered:

You see, most people aspire to the convenience of personal motor transport, pay dearly for the privilege, provide much employment, contribute greatly in taxes, and then people expect them to ‘leave the car at home’, while their money is spent appeasing the so-called green lobby by putting up useless wind turbines which are useless.

No, here in Scotland we are taking an innovative approach to pollution. Instead of taking the politically suicidal step of blaming pollution on us hard-pressed put-upon and blameless motorists who, after all, are just trying to get on with a job, instead pollution here is regarded as being a bit like the weather, something that just happens, something that we can do nothing about, and the onus is now on the supposed so-called victims of pollution to provide themselves with knowledge about pollution levels and then just stay inside, taking no exercise of any kind. Good. Of course, these people will be safe from pollution if they just get into their nice cars and drive to work or the shops or the gym rather than cycling or walking there. That way, safe from pollution, they will not only be contributing to the economy, but they will also be contributing to beneficial global warming.
Posted by 'Old Skidmark' at 15:25 No comments: