The Silent Majority wants to Save Our Heritage.

It can be tough going at times, trying to motivate the silent majority: continually issuing rallying cries to our silent silent supporters in aid of our campaign to "Save the Denburn Dual Carriageway!" ('like' us on FaceBook, 'follow' us on Twitter).

We take our obligations on behalf our our huge but largely silent support very seriously; the job has a high profile and entails real responsibility. As part of what we do, sometimes - like over the last few weeks - it's been necessary to report on the threats to not only the Denburn Dual Carriageway but also our worries about the other road projects which we hold dear in Aberdeen "City and Shire". It's upsetting work - we have to look at things which nobody should have to look at and read proposals nobody should have to read - but somebody's got to do it. One of the dangers of this type of work is that it can skew your perspective - turn you paranoid - you begin to see cyclits and pestestrians literally everywhere, murmering their creed of "reallocation".

But, we've had a nice weekend - got the car parked directly outside the house so we could look at it whenever we wanted to (comforting) and so we settled down to count our blessings. We noticed that our local MP, Dame Anne Begg, tweeting furiously that the AWPR Aberdeen Bypass is still a party priority, despite all sorts of anti-bypass misinformation promoted by our Dundee-based local press. And we also comforted ourselves with these thoughts:

Firstly, the work which will complete the A90 Trunk Road Anderson Drive "Ring Road".

Secondly, the work which will complete the "Inner-City Ring Road".

Thirdly, and most excitingly, the Aberdeen Western Peripheral Route - The Aberdeen Bypass itself. Still a priority for Dame Anne Begg MP, and MSP candidate Gregg Williams of the Labour Party. This will be a motorway. Sort of. 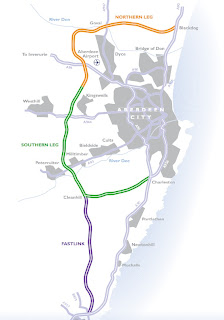 So, yes. Soon Aberdeen will be a city which has not one, not two, but three - yes three ring-roads. Two of these will be thrilling urban-dual-carriageways, and the third will be a motorway. Fabulous!

At last we can see the future - the future our forefathers envisaged in the 1952 Local Plan - a future full of cars busily speeding about on our three ring-roads creating economic growth for the whole country. By heaven it'll have taken a long time to get there - but it'll be worth it. The future IS what it used to be. These retro-modern transport plans are cutting edge. They say that if you wait long enough, fashions come round again. That means that Aberdeen is avant-garde.

Some say that these mid-20th century plans now reaching implementation are now out of place and unsustainable against the dark background of resource depletion and climate change. They say that the effort would be better expended getting Aberdeen "City and Shire" hooked up to next-generation fibre-optic high-speed broadband, but we don't really know what that means, so we ignore these calls. They say that the future can only be assured by the up-to-datedness of the fastest possible 21st century internet connectivity - but we think they don't know what connectivity means. The growth-generating drivers of Aberdeen Cars are only interested in the sort of connectivity which dual-carriageways and motorways can provide! High speed traffic flow! Now that's connectivity!

Soon enough, our city centre will be regenerated by efficient traffic flow delivering large numbers of high-speed drivers into the city-centre at a higher rate than ever before. More car-parks will be definitely be needed. And so our beloved Denburn heritage Dual Carriageway will saved for future generations. Hooray!

But what of the carbon emissions? Well, we all know that global warming is just a conspiracy theory to to make motorists feel guilty - yes, a myth put about by jealous hippy types who envy our lovely cars (and, as pointed out by our mentors at Bristol Traffic, what about all the carbon emissions caused by the manufacture of too many cycle helmets and high visibility jackets, eh?). But anyway - whatever! - we draw their sting with the Granite City Forest project. This project sort-of offsets the expected increase in carbon emissions by 'planting a tree for every citizen' and necessitates the slaughter of all the deer on Tullos hill.

Good. These spongeing animals do not contribute to economic growth. About these useless roe deer we care not a jot - they are in the way of our plans for dual carriageways and motorways. They deserve to die. Will we get to eat them?

So it's time for the silent majority to stand up and be counted, and hopefully encourage others to do the same. If you love your cars, if you love driving you MUST spread the word: