Barriers to the Uptake of Driving Really Nice Cars

They give with one hand, and they take away with the other. 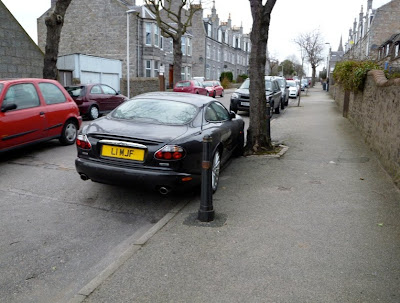 On Aberdeen's Pitstruan Place, the driver of Aberdeen Car Jaguar XK8 Coupe reg. L1MJF with its 4.2 litre engine is faced with an infuriating dilemma.

But in this case, the raised platform access to the pavement is blocked. Yes blocked, not only by the tree, but also by a hated bollard. Plaudits are due to our Jag driver for showing willing and getting at least some of his tyres up and onto the pavement. Dedication!

This is the very opposite of joined-up thinking from our local government. If they want Aberdeen "City and Shire" to be a forward-looking city with lots of economic growth and people driving really nice cars, then these barriers must be removed forthwith so that the drivers of the very loveliest cars can get them properly up on the pavement where they belong - letting the traffic FLOW!
Posted by 'Old Skidmark' at 08:44