MORE BAD NEWS for Aberdeen Cars in the Press and Journal

Consumed with inner conflict about the high price of petrol (bad for the drivers of Aberdeen Cars) and the high price of oil (good for economic growth in Aberdeen "City and Shire") we turned to our local journal of record, the venerable and redoubtable "Press and Journal" where comforting pro-motorist stories like this can usually be found:

Discontent over Pump Prices - in which the leader writer invokes the spirit of revolution in the Middle-east in calling for the put-upon drivers of Aberdeen Cars to rise up in their discontent and overthrow the government because of high petrol prices. Yay! Up the revolution! Right on! And we thought it was just the pestestrians and cyclits who were rebellious!

And this heart-warming story about radar-assist parking:

Reversing into the unknown after my beeps lose their ping

But then we saw this:

Bikes Buck the Trend in which the author says:

Demand for bicycles has almost tripled over the past 12 months, despite noticeable price hikes.

Evans’ success is, ironically, largely attributable to the economic downturn which has resulted in a sizeable number of people considering cheaper forms of transport. While other industries were contracting, the company opened four new stores last year, increasing its total to 36.

Cycling enthusiasts are fuelling the surge, as more people embrace pedal power. Cycle club membership has boomed as Britons have been bitten by the two-wheel bug. 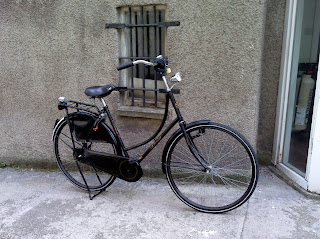 Companies such as Evans Cycles and Halfords have benefited enormously from the government’s Cycle to Work scheme. Both organisations are part of the Cycle to Work Alliance, a body which has enabled more than 400,000 people to acquire a new bike.

Under the programme, tax-deductible bikes were made available for people wishing to pedal to work.

Now, let's see if you can grasp this - tax breaks for bicycles? Employer-subsidised bicycles? We needn't tell our readers - the hard-pressed hard-working tax-farmed beleaguered drivers of Aberdeen Cars what we find morally, commercially and capitalistically reprehensible about this 'scheme'. That bicycle manufacturers and retailers are 'benefitting' from the economic downturn is just typical of these people. They "reap the benefits" while ordinary people suffer. It makes my blood boil! But wait, the article continues...


However, new tax rules threaten to halt the popular initiative by making users pay more for their discounted bicycles. Employees prepared to sacrifice a small proportion of their salary were previously able to acquire a brand new bike at a discount of up to 50% on the shop price, depending on their tax band.

In effect, workers hired the bike from their employers, paying for it via monthly instalments deducted from their salary before tax.

These hire arrangements generally lasted between 12 and 18 months, after which the bikes were sold to employees for their fair market value.

Up until August 2010, the tax authorities had not elaborated on what constituted fair, although most employers and employees accepted 5% of the original shop value was about right. However, HMRC decided the 5% figure was a gross under- valuation of most one-year-old bicycles.

All credit to the author of the Press and Journal article for trying his or her best to put a positive spin on it what with the changes to the potential magnitude of the tax subsidy for tax-dodging cyclists and everything, but we can't help thinking that this is just "whistling past the graveyard". But in any case, their dissembling PR-cookbook attempt to spread Fear, Uncertainty and Doubt amongst potential cyclists is regrettably wrong and so might backfire.

As the HMRC tax authority website points out on here there is actually minimal change to the 'facts on the ground', with the potential cycle-commuter now liable to pay a maximum increased charge for their tax-and-employer-subsidised bike of just £10. Yes, Ten Pounds. That's no sort of disincentive at all!

There's no disguising the grave nature of this development: the fact that cycling is 'on the up' is an abomination to Aberdeen "City and Shire".

The Press and Journal should have left well alone. This news should have been suppressed.
Posted by 'Old Skidmark' at 07:47

Email ThisBlogThis!Share to TwitterShare to FacebookShare to Pinterest
Labels: Cycling, War on The Motorist