Locking in the Benefits. By taking them away?

As part of the work of national importance which we do here at Aberdeen Cars we have been passed the "AWPR - Locking in the Benefits" document which was written by the nimby naysayers at NESTRANS. This made us worry. Worry on behalf of our followers who, like all drivers of Aberdeen Cars, want to "Save the Denburn Dual Carriagway!" ('Like' us on FaceBook, 'follow' us on Twitter.) 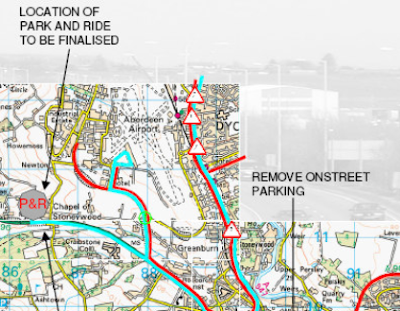 Part of this document relates to the "reallocation" of roadspace away from motorists in favour of buses, trains and bicycles and other measures to discourage the use of cars; improved facilities for cyclists and pedestrians and all sorts of other such airy-fairy nonsense for vegetarians.

As everyone knows, the only way to ensure future prosperity for Aberdeen "City and Shire" is to "go for growth" by putting more cars on more roads, then sit back and watch the economy rip! So, we're scared, yes - terrified - that the underuse of the Denburn Dual Carrageway (which we already identified) will lead to its "reallocation" under the NESTRANS fig-leaf of "Locking in the Benefits" once the Aberdeen bypass is open in 2012. Use it or lose it!

And then there's the "Tunnels Vision for Aberdeen Transport".

"Underground tunnels for buses and trams could be built in Aberdeen as part of plans which would see vehicles banned from three of the city’s busiest streets."

When we first heard about these tunnels we were delighted. But then we saw those words "...vehicles banned from three of the city's streets". They just don't get it, these "men of vision" do they? These proposals for extra futuristic road space shouldn't be "instead of" they should be "as well as". And so, they plan to give with one hand. Motorways, tunnels, relief roads. And take away with another. Road space reallocated to pedestrians, cyclists, trains.

That word "reallocation", frightening. Sounds a bit like "re-education" Mao-style. These war-on-the-motorist lefties are all the same.
Posted by 'Old Skidmark' at 16:20