"They put in all these cycle lanes and everything for them. And then you never see any cyclists using them!"

We're delighed to report that our secret agent "Codename JannieJumbo" is back on track, reporting pro-motoring content from his deep cover "legend" working as an agent provocateur within the "pro-cycling advocacy community" in Aberdeen. 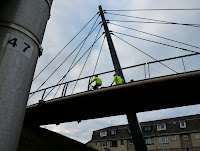 We were all the more glad of his contribution, because - as were all right-thinking motorists - we were horrified to discover that a new cycle lane has been installed on Aberdeen's historic "Road to the South" - Holburn Street.

Not only are we motorists having to endure the sight of cyclits and pestestrians showing off on the new bridge which connects the Old Deeside Line disused railway path from the western suburbs to the town centre, but we are also now being asked to tolerate them being allocated space on our carriageway!

But, a quick look at JannieJumbo's video settles our fears:

See that? See how the vast majority of motorists just ignore the cycle lane and encroach on it anyway? Delightful! By designing this cycle lane so very badly, the transport authorities in Aberdeen have managed to snatch victory from the jaws of defeat. They are obliged to spend a "ring fenced" budget for "Cycling, Walking and Safer Streets" on this type of infrastructure, much to the frustration of the drivers of Aberdeen Cars. So, by using this budget to install infrastructure so bad that it is dangerous to cyclists, the ring-fenced budget is turned against them and is actually being used to discourage cycling. Subtle. Genius.

So, once again, we applaud the designers of Aberdeen's cycling infrastructure - they have designed it so poorly as to be an actual disincentive to the uptake of cycling as a serious mode of transport (which, of course, it isn't). We admire this type of kung-fu. Turning one's enemy's own weapons against themselves is fantastically skilled, and maintains "plausible deniability". Fantastic! 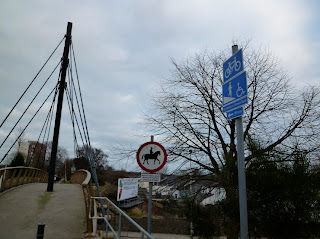